The inauguration of KMP Expressway by Prime Minister Narendra Modi will not only reduce the traffic burden on Delhi, it will increase the prospects of real estate in all the regions along NH-2 and NH-8 —A K Tiwary

With this world-class connectivity project finally completed and delivered, realty players expect an immediate increase in real estate prices along this corridor by around 10-15%.

Also known as Western Peripheral Road, the expressway has 8 small and 6 large bridges, 4 railway over-bridges, 34 underpasses, and 64 pedestrian crossings. KMP is expected to divert more than 50,000 heavy vehicles away from Delhi every month.

This will allow vehicles coming from Jaipur to bypass Delhi, on way to Faridabad and Agra. While the Kundli-Ghaziabad-Palwal (KGP) or Eastern Peripheral Expressway will connect Kundli, Ghaziabad, Gautam Budh Nagar, and Palwal the two combined will form an express highway grid around Delhi, allowing commuters to travel without touching Delhi.

It will decrease the travel time of heavy vehicles to many industrial towns including Sohna, Dharuhera, Bhiwadi, Bawal, etc, which were hitherto travelling through Delhi, and increase the accessibility to this industrial corridor for the rest of the nation. Areas like New Gurugram will also have increased connectivity to the areas around KMP.

With the opening of the expressways the realty market of Sohna, Faridabad, and Palwal will grow exponentially. There are big land chunks in these towns, which can now be used for residential and commercial real estate, demand for which has always been high here. These regions also have strategic geographical location, as they are already accessible from all the major cities in the Delhi NCR and will be even more accessible moving forward.

Other than connectivity quotient, these regions tick all other factors necessary for industrial, commercial, and residential development. This region has top educational institutions, health centres, retail and entertainment zones, hospitality properties, and business hubs. All these qualify the region as a good residential destination. Moreover, with the region falling directly on the DMIC, it is sure to see an upward demand in the years ahead.

Navin Raheja, CMD of Raheja Developers, said: “The opening of this stretch will not only cheer developers and homebuyers but also the real estate market in the NCR as a whole. KMP will also degongest traffic heading towards NCR, which will reduce air and noise pollution.”

R K Arora, CMD of Supertech Group, says: “KMP is set to prove as a major catalyst of industrial, residential, and commercial development in the region. In Haryana alone, 13 theme-cities have been planned along this corridor. It will create huge employment in the NCR region, especially in Kundli, where KGP and KMP eways meet on NH-1.” 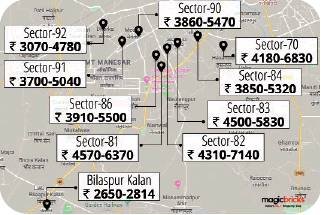